This year we are proud to present an international ensemble of projects and makers focusing on LGBTQI+ communities and individuals. Films, Live Events and Alternate Realities experiences and installations will feature throughout the festival from the UK and around the world.

Among the highlights is a live performance by House of Ghetto, a Mancunian voguing troupe made up of largely young black women after the screening of Amy Watson and Dennis Keighron-Foster’s Deep in Vogue, a documentary presenting a colourful perspective on the vogueing subculture in Manchester. Comprising interviews, archive, and behind the scenes footage, this vibrant film provides a first-hand account of the glamour and the confidence that a thrilling vogue ball gives to the local LGBTQI+ community.

In our Film programme, director Jack Hazan will attend the screening of the European premiere of the 4K restoration of his David Hockney biopic A Bigger Splash, recorded over three years following the artist’s break-up with his partner Peter Schlesinger. Acclaimed British director Jeanie Finlay’s new film Seahorse, competing for the Youth Jury Award, will be presented as a Spotlight screening, followed by extended conversation between the director and the film’s subject Freddy McConnell, trans man who gave birth to his child.

The strand Focus/Shapes That Move, showcases the work of British feminist film collectives, including a programme, Flip the Script, which turns normative gender and sexuality on its head with short docs from Pratibha Parmar, Leeds Animation Workshop and Campbell X. 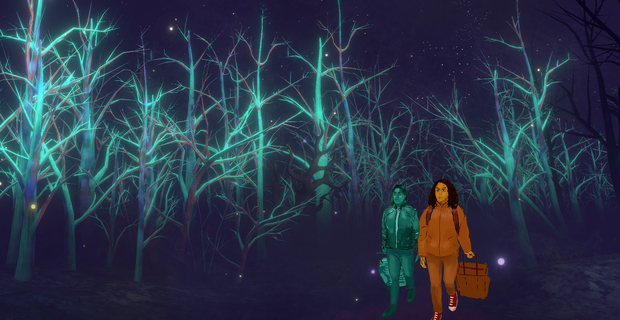 Alternate Realities, our digital art exhibition and VR Cinema showcasing powerful interactive narratives and immersive experiences, includes Through the Wardrobe, Rob Eagle’s Augmented Reality installation inviting audiences to explore the belongings of others and play with gender expression, and Tamara Shogolu’s Another Dream, a VR installation in which an Egyptian lesbian couple, facing a post-revolution backlash against their community, must choose between love and home.

The line-up also features My Mother’s Kitchen, an interactive documentary conceived by Maeve Marsden, Tea Uglow and Olivia Rosenman, featuring the stories of eight LGBTQI+ individuals as they relay intimate memories of their mother's kitchens, filled with joy and comfort mixed with inequality and hardship.

Our Interim Director, Melanie Iredale says: “We are so proud as always to bring such a broad spectrum of LGBTQI+ stories to Sheffield Doc/Fest. Films, live events and projects in the programme celebrate queer bodies through dance, rejoice in multiple identities, and invite audiences to play with gender expression through clothing. Some works explore the political—persecution, activism, the fight for equality—and others the personal: love and heartbreak, pregnancy and birth.  Within the LGBTQI+ documentaries and Alternate Realities projects at Doc/Fest you will find those which take great risk in storytelling and those which experiment with form, whether through film, shorts, live performance, interactive games, augmented reality, virtual reality or motion comic. Come watch, play, and vogue.”

Find out more by reading our full press release here.